Moving my post on intersectionality and radical feminism here- 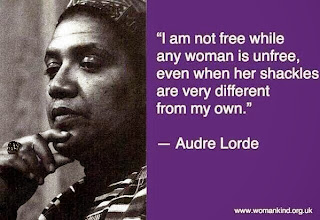 [Please see previous post on white privilege if you would like more personal background/context for your anonymous blogger.]
I only came across the term “intersectionality,” a term first coined by Kimberle Crenshaw to describe the multiple, interrelated axes of oppression experienced by women of color, when I joined Twitter earlier this year.
However, here is a summary of the house course I co-taught (with another 22 year old white woman) as a college senior in 1997:
"Ain't I a Woman?": Multiple Perspectives on Feminism”
Week 1: Introduction
Week 2: Background and History
Week 3: Anthropology and Language
Week 4: Race and Ethnicity
Week 5: Class and Privilege
Week 6: Religion and Spirituality
Week 7: Sexuality and the Body Politic
Week 8: Marriage, Motherhood & Family
Week 9: Work and Education
Week 10: Media
Week 11: Writing and Voice
Week 12: Future/Conclusion
I’m not sharing this in hopes of proving how special I am; I’m not really interested in the Speshulness Olympics as my self-esteem is doing just fine without the approval of strangers on the internet, TYVM. What I want to suggest is that anyone who is interested in intellectual honesty and who can listen to the experiences of others can get on board with the idea of multiple, intersecting and interrelating axes of oppression.
***
As I stated earlier, I support the right of people of color to draw whatever boundaries they want, and would not ever force myself into discussions about either race or feminism or anything else between women of color who do not wish to engage with me because I’m white. That’s perfectly understandable. Women of color don't owe me any of their time. Of course, there are many women of color who are happy to talk with me about feminism and other concerns, and I’m glad and very grateful for that.
What I take issue with are the “trans activists” trying to equate radical feminism with white supremacy, in order to silence radical feminists. This is nonsensical. The idea that one’s reproductive system should neither elevate (male) nor limit (not-male) one’s social standing (but currently does) is 100% compatible with the idea that one’s race should neither elevate (white) nor limit (not-white) one’s social standing (but currently does). This nonsense also erases women of color who are radical feminists.
Some white feminists have been/are racist, obviously. Many (some would say all) white people are racist, and every single political group on Earth contains some assholes whose political analysis is limited and selfish. Should “white feminists” be exempt from criticism? Of course not. Feminist theory, like any other vital and evolving theory, requires constant, vigorous critique.
However:
1) “Not inclusive enough of anyone who was born and raised male but says they are female” is not a valid criticism, any more than “not inclusive enough of anyone who was born and raised white but says they are a person of color” would be;
2) Ill-informed pile-ons are not critiques; and
3) Actually nobody’s analysis should be exempt from criticism. That’s not how analysis works.
***
Just as all white people grow up with white privilege, all males grow up with male privilege. Even males who transition and live as women still benefit from their previously accumulated years of male privilege.
Pro tip: When you allow white males to co-opt intersectionality to get away with hand-waving their male privilege and in fact brazenly pointing to their male bodies as a sign of oppression rather than privilege, and female ("cis") bodies as privileged rather than oppressed, they won’t stop there: 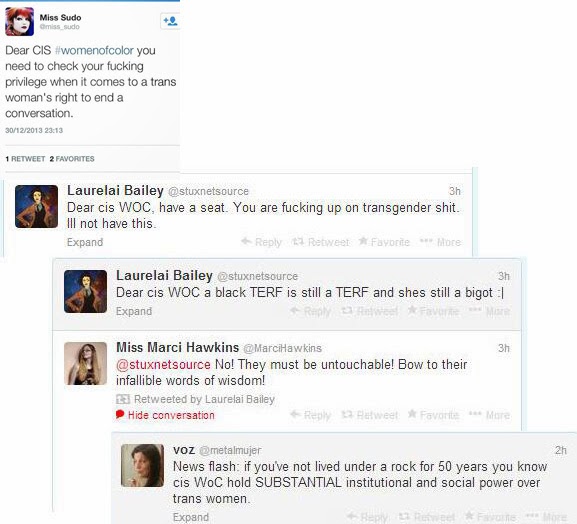 ***
Male humans should analyze *perceived gender conformity* as an axis of oppression – masculinity is toxic and needs much deconstruction! However, that analysis should 1) be shouldered by males, not demanded of female feminists, and 2) always keep in mind that no amount of gender conformity protects female humans of any color.
Because just as all males grow up with male privilege, all females grow up as second class citizens. In fact yes, there are experiences of sex-based oppression shared by females worldwide. Do those experiences vary based on other factors such as race, religion, economic class, geographic area, physical disability and et cetera? Of course. Do the experiences of an upper class black male living in a major metropolitan area of the United States differ from the experiences of a poor black woman living in a rural village in Kenya? Of course they do; however racism is still an axis of oppression, just as sexism is still an axis of oppression.
The idea (pushed by AFTAs) that white women don’t experience any real oppression elevates white men’s facile portrayal of white womanhood, as Catherine MacKinnon talks about in her prescient article, From Practice to Theory, or What is a White Woman, Anyway?: "Beneath the trivialization of the white woman’s subordination implicit in the dismissive sneer 'straight white economically privileged women' (a phrase which has become one word, the accuracy of some of its terms being rarely documented even in law journals) lies the notion that there is no such thing as the oppression of women as such... "


Furthermore, oppression is not a zero sum game (it is not a game at all.) Some white women are more Dorothy Allison than Gloria Steinem. Some white women are poor, disabled, lesbian and still work towards racial justice in their communities, like Victoria Brownworth. Furthermore, some white women partner with men or women of color and have bi- or multiracial children. Some women may be perceived as white but endure prejudice nonetheless, and I'm hoping a Jewish friend of mine will write her own blog about that. None of these factors cancel out our white privilege, but neither does our white privilege cancel out other struggles. Much as a black man working a highly-paid job and living in a sweet Manhattan penthouse will still experience daily racism, which is not canceled out by his male privilege or economic fortune. The very term "intersectionality" doesn't imply either/or, it implies AND.

***
And it would be really great, in fact, for anyone living in a temperature-controlled domicile in a neighborhood safe from bullets and bombs, with clean water, indoor plumbing and electricity -- not to mention access to food stores provided by migrant workers, consumer goods built by factory workers in the 2/3 world, and petroleum products secured through imperialist wars -- to check all that privilege before preemptively judging anyone else based on their privilege, whether obvious (white) or assumed (economically secure, able-bodied, etc.) I sometimes imagine telling my Nairobi homestay mom about the Twitter knuckleheads tweeting their intense distress over their *identities* or *pronouns* from their $500 phones and want to “ROFL” at the mental image of the most sigh-heaving, eye-rolling “SMH” of all time.
Furthermore, being asked to check your “first world” privilege is only going to feel rude or threatening if you think privilege-checking is about SILENCING others. ("First world" is a problematic term; Jonathon Kozol describes schools in the United States that are nightmares compared to the three room schoolhouses I visited in Kenya. Therefore I use the term to refer to resources, not location.) I'm not interested in silencing anyone, but I am interested in seeing some perspective brought to the endless Oppression Olympics on Twitter. There are literally millions of human beings who were born into realities that did not allow them to take for granted that their basic human needs for survival would be met, much less that strangers on social media would kow-tow to whatever seven-adjective identity they woke up feeling like tweeting about today. Many of them picked your food or assembled your iPhone or sewed your clothes or died in the war that filled your gas tank. You didn't ask to be born to the group of humans who benefit from this situation, but nevertheless there you (there we) are.
***
So here’s a question for anyone obsessed with cataloging their own individual oppressions and the (real & perceived) privileges of others: what do you hope to win? If all women eschew all privilege and remain poor and underrepresented in positions of power, will that defeat white supremacist patriarchy? Or maybe does white supremacist patriarchy benefit hugely from this fetishization of oppression by the oppressed, not to mention the isolation of the oppressed from the privileged?
Could we instead think of privilege-checking not as a tool of silencing others & elevating our analysis above critique, but instead as a way to situate our own analysis and to approach the analyses of others? Might this better help us find shared experiences of oppression (not all experiences will be shared by males or white women!), practice class analysis, and from those analyses work to deconstruct and dismantle systems of oppression?
Because here is what I wish for each and every one of you: Less oppression, not more.