9 out of 10 conversations with Lefty dupes about bathroom bills 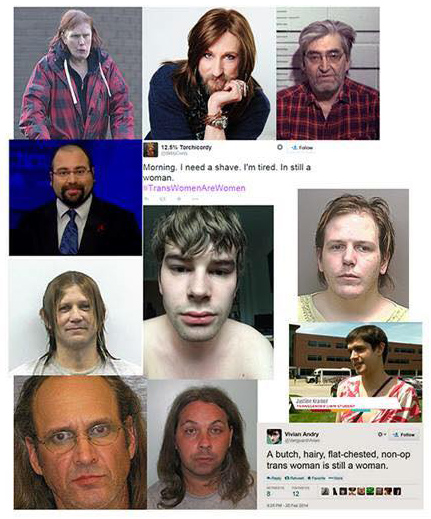 LD: Those aren't really transwomen.
Me: A transwoman is any male who simply claims to "feel like a woman." Here is a chart of gender identity laws and a page full of social media screencaps that back up this definition.
LD: No man is going to fake being trans just to enter the women's room.
Me: Here are 25 examples of crossdressing males committing criminal activity in women's restrooms.
LD: Well those aren't real transwomen, they're just men faking it to get into women's restrooms.
Me: You just said that never happens.
LD: Fumes. Look, we can't force transwomen to share bathrooms with men, men are dangerous!
Me: I agree men are dangerous, which is why we need to write gender identity laws that make sure they are not allowed free entry into female spaces.
LD: God, why are you so paranoid about sharing a bathroom with men?
Me: You just said men are dangerous.
LD: WHATEVER, YOU ARE A BIGOT!!!

~*End scene: It is bigoted to name male violence as the problem.*~

*Nobody is actually checking genitals, which means transpeople who pass aren't effected. Also, someone who has transitioned but doesn't pass can still acquire opposite-sex designation on their official documents. Either way, actual transpeople can continue using their preferred restroom.
Posted by MHB at 6:35 AM