Sex & Race & Boundaries On The Left

Many white feminists wish to explore comparisons between racism and sexism, and sometimes we do it poorly, and often we are castigated for even attempting it. Before I begin, I will point to my essay on my own white privilege. Operating from that context: I think racism and sexism are comparable as axes of oppression, but do not operate in the exact same way, because racial differences are not very meaningful biologically but sexual differences are.

This is NOT to say that sexism is “worse” than racism. I can’t conceive of even one good reason to compare the two in order to pronounce one “worse” – both are irrational and cruel. And of course, millions of women of color experience both.

The only reason I am interested in comparing racism and sexism is because I see the boundaries between people of different races and the boundaries between people of different sexes being treated so differently by self-proclaimed liberals. On any one leftist Twitter feed or blog you can see these sentiments play out alongside each other: 1) White people, no matter how well-meaning, need to leave people of color and their cultures alone. 2) A man who feels like a woman is a woman.

So, here we go. (I will be presenting (an imaginary) black man to begin with because I live in America and black/white is the most contentious race relation here, not because I’m under the delusion that no other races/ethnicities exist or matter.)

The category “black” does not encompass everything about this particular human being.
We can only assume one thing, based on this person’s blackness - he has faced racism:

As stated above, racial differences are not very meaningful biologically. And we know Charles Murray’s ideas about black brains are hogwash. That doesn’t mean race is not an important political category.

Because racial differences do cause others to make assumptions about an individual’s cultural heritage, and to make irrational value judgments about that individual’s personal qualities from those assumptions. (People of European descent supposedly = smart, civilized. People of African descent supposedly = unintelligent savages. For a thorough rejection of any ideas of innate white supremacy/manifest destiny, I suggest Jared Diamond’s Guns, Germs & Steel.)

Certainly, none of this means white people can act out racist stereotypes in order to co-opt blackness as an “identity.”

Now let’s move on to sexism.

This is a broad definition of a category that is biologically and politically meaningful to 3.5 billion human beings.
Furthermore, the category “woman” does not encompass everything about these particular human beings.
We can only assume two things, based on the femaleness of these human beings: 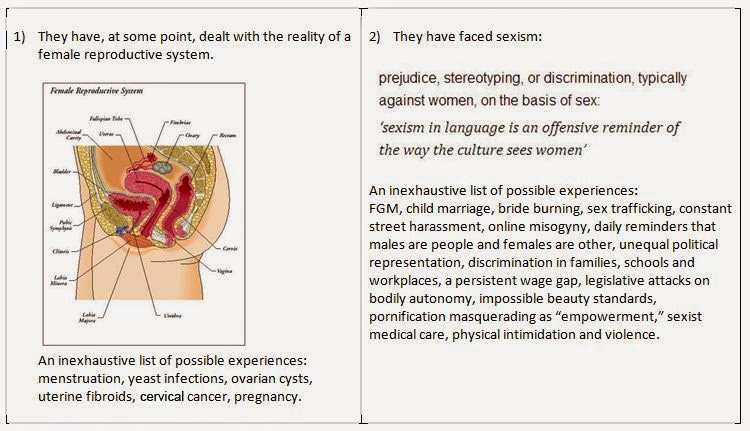 Sex differences are meaningful biologically. However, this biological meaningfulness only extends to the functions and needs of reproductive systems. There are no male brains and female brains, as the brain is not a reproductive organ. (See Cordelia Fine’s Delusions of Gender for more on debunking neurosexism.)

Sex differences are also meaningful politically. Because people make assumptions about an individual’s reproductive potential, and then make irrational value judgments about that individual’s personal qualities from those assumptions.

None of this should mean that men can act out gender stereotypes of femininity in order to co-opt “woman” as an “identity.”

Because racism and sexism are comparable but do not operate in exactly the same way.

As stated above, sex is both politically and biologically meaningful. This is because the female class of humans can make babies. And humans are an intensely social species. The ability to produce other humans is a RESOURCE. Men want to control that resource.

The feminist movement has made strides in proving that women are not, as the foundational patriarchal reversal would have us believe, naturally submissive & dependent on men because we (as a biological class) have the physical ability to incubate new life. But men still want to control our bodies.

Many men in power still consider children “illegitimate” if born “out of wedlock,” meaning they are not the property of men. Thus many men in power are still politicizing birth control and abortion.

However, proving that this is a bullshit game that women cannot win, men also treat sexual intercourse not as a potentially delightful yet inherently risky physical act between two people -- but as an independent resource, a commodity to be wrangled or bought, and to which men are entitled. (See: Amnesty International).

In both these cases, we have this woman (adult human female): 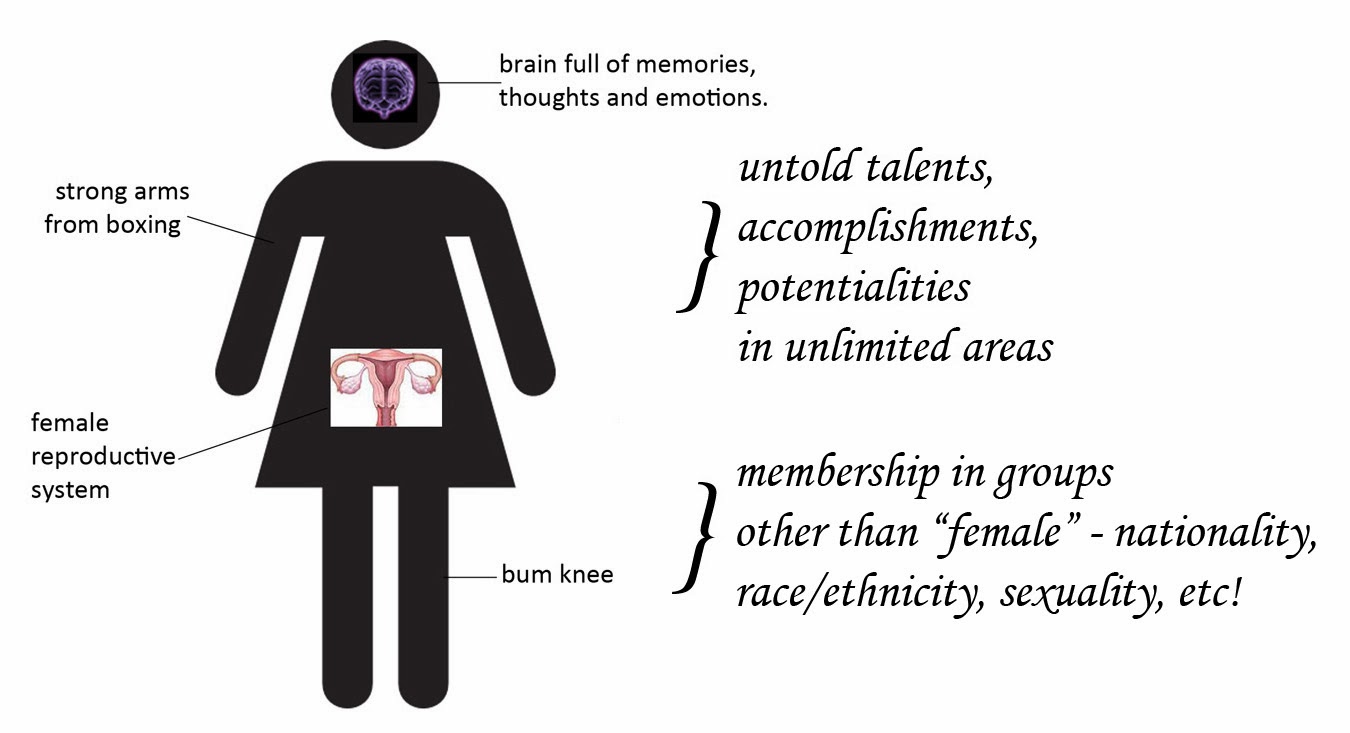 …being told her physical body and the organs contained within it are not an integral part of her entire human self but something separate, alienated from her, something to be controlled and exploited by men.

Similarly, when we are told by AFTAs (anti-feminist transgender activists) and their allies that we cannot claim the biological category “female” without somehow being "biological determinists" (for the record, that term applies to the belief that biology determines behavior, not functional categorization) - we are being told that there is no being female without that label defining all of us, erasing everything else from the above illustration, from our human lives. This is just another attempt to make sure we do not see our female bodies as integral parts of our entire human selves, parts that require no shame, and parts that belong only to us.

Can you imagine a world in which a man who wished to acknowledge his maleness was told he could then only serve to produce sperm for women who wish to utilize it, and/or do physical labor, due to his “natural” suitedness for such? No. Men are allowed bodies, sexed bodies, without compromising their humanity. In fact, the whole world is shaped to provide for the happiness of their penises.

It’s not too much to ask that women be allowed ownership of our own sexed bodies without compromising our humanity, and to shape this social world of ours to support rather than denigrate our reproductive work (which should always be freely chosen) - without disregarding any other work we do.

I will repeat this every day until it is heard: Women are female people. Both words matter there. Female, and PEOPLE.

When we talk about differences and boundaries, we need to remember we're talking about POWER.

The Left is mostly run by white males. They benefit from white supremacy and male supremacy.

People of color are making inroads into spheres of power previously reserved for white people. Therefore white supremacy is served by encouraging strong boundaries between white people and people of color. I am not saying people of color shouldn't have boundaries. I am saying we need more friendship and empathy across those boundaries. After all, just how Othered does a group of people have to be for white men to repeatedly get away with SHOOTING UNARMED CHILDREN from that group?

Meanwhile, women are making inroads into public life, which means they are much less dependent on men in their private lives, which means men are losing access to/control over female bodies. Male supremacy is served by knocking down any boundaries that provide women safe space away from men. And of course, male supremacy is always served by blanketing any discussion of female reproductive systems in shame, whether that shame is due to "sinfulness" or "cissexism."

I have written here about the male desire to exploit female bodies; clearly people of color have their own experiences of the utterly destructive exploitation of their bodies, and lands, and cultures by white people --and women of color can speak to both.

What I wish us to consider is simply this: Domination along these two different axes of oppression is achieved and maintained in different ways. This is, I think, the beginning of at least a partial explanation as to why the boundaries between races and the boundaries between sexes are treated so differently on the so-called Left. This is also why it is imperative for us to talk more, not less, about how and why different axes of oppression operate, compare and relate.


[More on my thoughts re. intersectionality here]