This post is about, though not in response to, this drivel:

Natacha, true to form, begins with a lie. Natacha was not forwarded this letter from an anonymous source. Natacha is on the mailing list for Goldsmiths at the University of London, a group to whom the letter was sent for possible signatures. Except of course, "Natascha" is listed there as Mark Hellen. Mark Hellen is "Natacha's" male name.

That's right, Natacha only "lives as a woman" part-time. Apparently, Natacha might also experience a kind of multiple personality disorder that allows a person to publish a paper as two people: 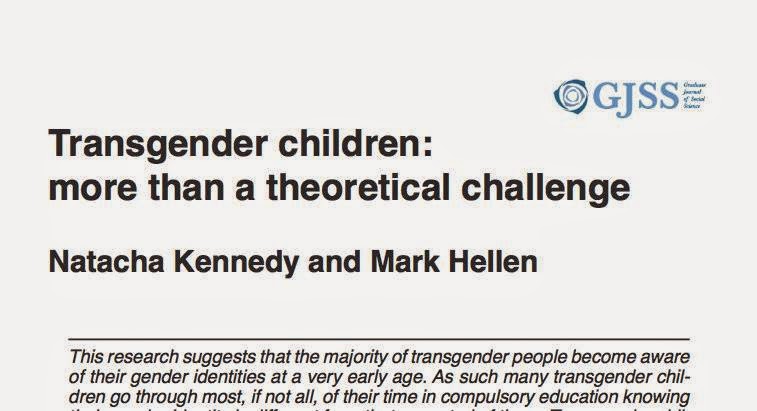 I'm not going to waste my time with a point-by-point rebuttal of Natacha/Mark's post, as anyone who actually cares about the Nordic model can do their own research. Also, I've already written about the absurd idea that college students shouldn't have to confront "offensive" views. I'm only interested in how this post so helpfully illustrates several key AFTA (anti-feminist trans activist) themes:

2) The concurrent a) representation of any [failure to capitulate totally to any self-identified "trans" person] as abuse and b) dismissal of actual intimidation tactics by "trans" activists. "Germaine Greer did not want to work with Roz Kaveney" becomes "Germaine Greer censored Roz Kaveney," while "trans activists sought to end Rupert Green's political career" becomes "well, he deserved it."

In order to distract from the absurdity of this claim, (white, middle class) AFTAs must routinely co-opt the real male violence faced by poor transwomen of color who are *dun dun dun* engaged in prostitution, and blame that male violence on the evil TERFs. The male violence endemic to an industry that presumes males are entitled to use other humans' bodies as masturbatory aids is co-opted by privileged assholes in order to monster feminists.

But AFTAs don't care about solving the problem of violence against poor transwomen of color, only weaponizing it on their own behalf.

Whose existence is being erased? Do we have any words left to describe ova-producing people without reference to sperm-producing people? What spaces are left for us? What analyses? None.

Universities are both important and dangerous for trans people? What about female students who might like some tools to describe and fight their oppression? You know, the same female people who face something like a 1 in 4.5 chance of sexual assault on college campuses? Nothing for them? Great.

And of course, feminists who think "woman" is a material reality - that we are born into female bodies and face lifetimes of socialization as second class citizens - are categorized as a fringe minority who offer "no critique of gender." Our lived reality, erased. Decades of feminist analyses, erased.

5) I discussed above the rhetorical marriage of the anti-feminist propaganda terms TERF and SWERF. You can read TERF as "person who does not prioritize male feelings" and SWERF as "person who does not prioritize male orgasms." However, after spending more than a year on Twitter observing the behavior of AFTAs, I'm gonna go ahead and say both terms are about putting male orgasms at the center of feminism.

In re. prostitution: Men view assisted orgasms as their human right. (Amnesty fucking International backs them up on this.) Men supposedly need to use other humans' bodies (usually women, sometimes men, more often than you might like to think, children) as masturbatory aids, so we must designate an underclass to serve those men who cannot find another person to serve as said masturbatory aid in the spirit of mutual desire. Otherwise, men might take their "needs" out on the "good" women. This assumption lies at the heart of all arguments for legalizing the purchase of sexual access to another person's body. No one is concerned about women having a designated underclass to serve our sexual needs. No one is concerned about men learning an adult level of self-control. Easy access to assisted penile orgasm is all that matters. Except, of course, to those evil evil SWERFs.

AFTAs, meanwhile, get their kicks a different way. This article illuminates some of the psychological facets of autogynephilia, including its high correlation with masochism: 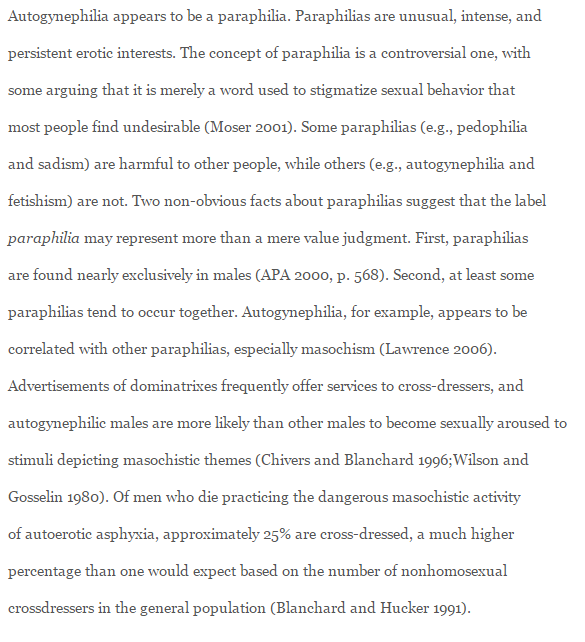 AFTAs find sexual pleasure in both viewing themselves and having others view them as women - but not just any old women. The most oppressed women ever. The most distressed of damsels. And social media enables them to act out masochistic fantasies in front of an adoring audience from the comfort of home.

Log on to the internet: Tumblr, Twitter, Facebook, Reddit, pick your favorite. Claim to "feel like a woman." Wait for some uppity female person to ask what that could possibly mean. If you don't get a bite right away, try something a bit more provocative: 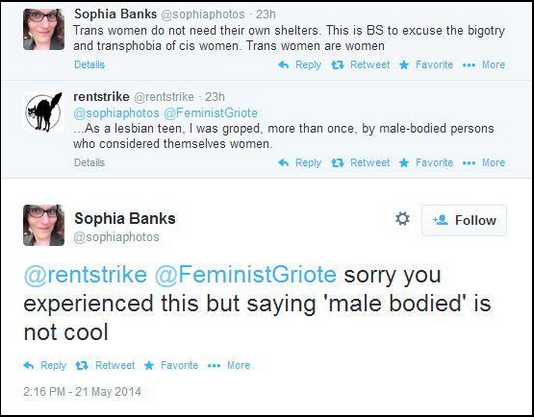 As soon as you are questioned in any way, cry TERF, and portray any questioning of your feelings and demands as equivalent to murder:

DON'T WORRY, nobody will question the assertion that a woman calling a white middle or upper class, usually heterosexual male with a fully intact penis "he" on the internet will cause other males to murder poor transwomen of color who are engaged in prostitution. Nobody will do the Google search necessary to find out that 1 in 12 estimate was back-of-the-envelope and only ever meant to apply to people who were profoundly transsexual from an early age. Nor will anyone question the assertion that a male person privileged along several axes of power has the right to demand all strangers recognize and pander to his self-professed special gender feelz on pain of suicide threat, while women are told we must call ourselves "cis" because unless we claim to "feel male" we must have ladybrains and innately deserve our oppression.

After all, people HATE to question male entitlement and LOVE to blame women for male suffering. So you're all set. Assert that female biology is a social construct and feminine socialization is a privilege, then flail about crying hate, murder, "you don't want me to exist," abuse abuse suicide when any feminist dares question your anti-feminist presuppositions. Legions of loyal fans will line up to wipe your tears and smear your enemies, because most mainstream liberals would rather spew piousness than engage in one second of critical thought. They'll eat it up when you opine on the necessity of sterilizing gender non-conforming children even as young transwomen stop attending support groups because they've been taken over by pervy late transitioners.

Now, don't concern yourself with the plight of those kids, nor the plight of poor transwomen of color - don't feel you must do anything that might address the intersecting structural inequalities of sexism, racism, classism, and homophobia, and don't feel guilty that you're trampling those realities into dust with your histrionic hear-tearing about pronouns and temper tantrums about mean lesbians who won't suck dick. You don't need to worry about GNC kids or poor transwomen of color any more than the pimps trotting out highly-paid escorts as poster girls for "sex work" need to worry about the millions of victims of sex trafficking. Actual victims of actual violence don't matter here. The only thing that matters is that you can leverage the suffering of those victims for penile orgasms. In this case, autogynephilic, masochistic penile orgasms.